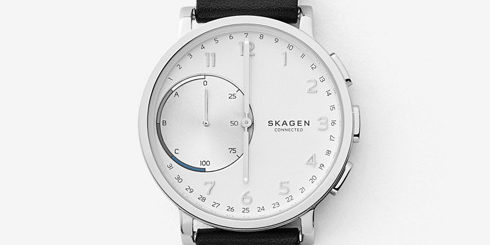 Skagen has come out with a line of wearables, the first of which will be a smartish watch and activity tracker under the name Hagen. If that sounds familiar, Skagen has been selling a  sleek analog watch under the name for some time, but this new line will be its first foray into the wearable world. If the actual product matches the render Skagen is showing off, the Hagen Connected may be one of the best-looking wearable on the market, and it’ll also be one of the few that doesn’t need to be charged.

The Hagen Connected runs on a standard coin cell battery, eliminating the need to charge your watch every night (Skagen hasn’t said how long the battery will last before needing to be replaced). Skagen says the watch, which looks to have a fully analogue face, will be able to automatically adjust time zones, track your steps and water intake, control your music, and provide email and text notifications. The watch will come in four different styles, and interchangeable leather, steel-mesh, and silicon bands will be available for purchase.

The company will also release the Hagen Activity tracker, which can also track your steps and goals, and control your music. Both the watch and the activity tracker will sync with Skagen’s app, which the company says will be available for both Android and iOS. While Skagen hasn’t shown any images of the activity tracker yet, the company says it will be available in October, while the watch will hit shelves in September. The Hagen Connected will retail from €199  from all Sunlab shops as well as on www.sunlab.com.mt